TL;DR: Some cool ideas are emerging to replace parts of your local country’s authority over your daily life and work. But if you think this means the swift end of nation-states and the way they function, think again.

A few weeks ago I became an official e-Resident of Estonia. The process was more formal than I expected, in the end — a personal appointment at the Estonian Embassy in Tokyo, with its old-fashioned European living room ambience and plush carpets. I was interviewed, fingerprinted, and handed a digital card that represented my new online identity.

The Estonian e-Residency program turned one year old last week. The Estonian government is, reportedly, surprised at how popular it’s been so far.

“A year has passed since the Estonian e-residency programme was officially launched; as of today, more than 7,200 people from 121 countries have joined, over 240 new companies have been founded by e-residents, and more than 530 entrepreneurs use e-residency to administer their businesses.”

It’s a simple yet radical concept: an online digital ID connected directly to your real-life self. It isn’t designed to protect your privacy or anonymity on the internet; it’s for those times when you need to do business with strangers and convince them you are who you say. Local passports and ID cards are often useless for this purpose — they’re not recognized, and easy to forge in a digital photo. Governments with resources to check them out will accept them, but banks and businesses often won’t.

Estonians themselves have had digital IDs for years. The card’s cryptographic signature is as legally binding as one you write on paper with a pen. They even use them to vote in elections.

So Estonia had an idea — since it works so well, why not offer digital IDs to anyone in the world?

END_OF_DOCUMENT_TOKEN_TO_BE_REPLACED

You Have More Memories Than You Know

Did you know, if you ask someone to name their earliest childhood memory, they’ll probably tell you the wrong thing. It’s not a lie – they just can’t actually remember.

They’ll ‘remember’ something that’s from a photo, or something far more recent than they imagined. Or it’s one of those anecdotes their mother repeats endlessly (and seemingly moreso as she gets older).

Ever visited a place you knew well from your childhood, only to notice it’s nothing like you remembered? Things are in different places. Most seem smaller. Some objects only ever existed in your imagination.

Your mind was in a whole other state back then. It was spongier. Things mattered more, and mattered differently. It didn’t process thoughts the same way it does now (thank god) and had no experiences to reference those thoughts against. Whatever you think you remember from ages 3-4, you’re probably off.

And that’s as deep as I’m gonna get into that one, since I’m neither a psychologist nor a neurologist (trust me, you don’t want me to try).

END_OF_DOCUMENT_TOKEN_TO_BE_REPLACED

We have monorails, skyscrapers, artificial islands and some of the nicest-smelling rivers in the city. At least until the tide goes out.

For the record, Southtopia MkII starts here. Older posts are from 2011 or earlier, which ended (funnily enough) around the same time someone put a baby in my house.

Schooled by a baby

Generally speaking, babies just aren’t on my list of things I like. They have screams that cut through the most productive thoughts, they smell of milk and sweat, they can’t hold a proper conversation and they turn previously interesting people into kid-obsessed, suburban messes with a newfound interest in taping foam padding to every corner in their toy-filled houses.

So to anyone who thinks I’m a dick after reading that first paragraph, you’re right. But you can relax, because I’ve now joined the Dark Side. It took us a little longer than most of my friends who by now are hunting for good schools and bicycles for Christmas, but I’m happy to say we have a baby of our own.

He smells of milk and sweat, but it’s sweet. When his screams pierce my thoughts I start cooing to calm him down. We laugh while changing his shitty diapers, I love mixing milk formula at 3AM and of course we can communicate perfectly through sign language while I learn to speak baby talk.

All the people whose babies I ignored over the years are fawning over him on Facebook, adding guilt to my conflicted emotions. And I’ve started scoping out our apartment to ID any corners that might need padding.

It is too late for me now. He’s used his baby Jedi mind powers on me and I’ll do anything he wants, with pleasure.

Being thirtysomething is strange enough. You realize you’re not as cool as you wanted to be, you never will be, and you don’t care anyway. For some, there’s a journey of apostasy covering everything from political views to what counts as reasonable employment and good music. Tolerance for challenging things, like Art and university students’ opinions, may plummet.

I’ve been through this. But the switch was flipped to adulthood and soldered in place in the space of five minutes in September. It was after midnight. My wife had just given birth after a long labor and was in need of repair, to which the doctors were attending. It was a busy night in the maternity ward and the staff had other things to do once they’d washed and weighed him. I was the typical useless new Dad with a spare pair of hands and nothing to do, so they left me there with my new son, alone in the room and in semi-darkness, until everyone was ready to see him again.

He’d stopped crying by then, and was staring at me in a pose not unlike the one in the photo.

And it occurred to me: how many men ever get the opportunity to be all alone in a room with another human who’s been in the world less than 10 minutes? Probably not as many as you’d think. I was completely unprepared–surely there’s a speech you’re supposed to deliver in this situation, a responsibility to say something profound. So I did. I don’t remember the exact words but they were probably so mawkish they shouldn’t be repeated here. Sacred words from a father to his brand-new son; a wish for a wonderful life and a promise to do the right thing. A warning that the world is something you often need protection from. Wondering what could possibly be going on in a mind that was immersed in warm amnionic fluid until just an hour before, and now needed to comprehend a very different place.

Such moments in such a cocoon will change a man whether he invites it or not. So, please forgive me for getting all sentimental and trying to put it into words. I’m really not 100% OK with my new body yet and I’m not sure if the effects are permanent. I wonder if I’ll ever be able to write or enjoy another horror story without feeling actual horror. I will promise, though, this is the last time I’ll blog about parenting. Others are really much better at it and it’s best left to them.

I’m a podcast freak. News, fiction, lectures, whatever. The constant info-feed into my ears at all hours has obliterated my music habits and left me with no space for my own thoughts. Stories from Escape Pod, Starship Sofa and Variant Frequencies can get into your brain like nothing you read on the printed page.

One that did was an episode from Pseudopod (horror podcast) called Linda’s Appointment. Written by Mike Norris, it’s an utterly horrific story of a man whose wife is tormented in a disturbing series of experiments by unseen ghouls or aliens, and he is powerless to do anything to stop it. It made my hair stand on end as I listened to it on my way through the subway station.

[Here’s a link to the audio, though get ready to squirm if you dare. It does have some laughs though, a reference to Melbourne as the farthest-flung place in the world, and the ending is a kicker.]

Norris said he wrote the story after watching his wife go through pregnancy and feeling the same helplessness at being a bystander to her ordeals. It didn’t surprise me, even though at the time I had no idea what that would be like. In the years since, however, I’ve watched my wife go through pregnancy, the death of her father, chemotherapy, surgery and more. Unlike the couple in Linda’s Appointment we came out of it OK, but I couldn’t get that story out of my head the whole time. This is my thanks to Mike Norris for truly creeping me out, not once but several times over. Not many writers can claim such a lingering effect.

Fountains, escalators, and other indicators of doom

I’m from Australia so dry fountains shouldn’t even stand out to me. There was a drought that lasted over ten years there, electronic billboards said water reserves were less than 30% and whole rivers and lakes disappeared. Household use was restricted and ornamental water features were  switched off. Grand public buildings became less grand and park centerpieces turned into silent, weird looking stone bowls with bits of shower hosing protruding from them. 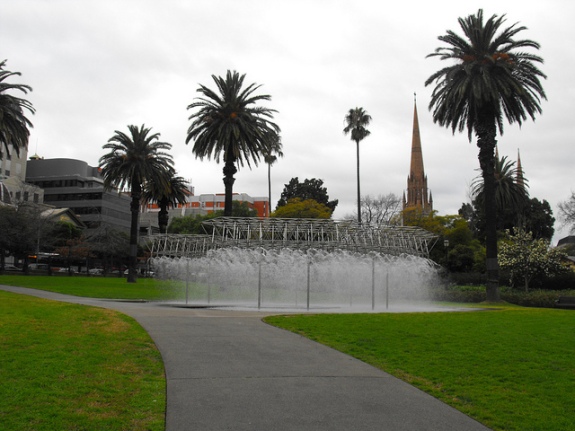 They said it was a permanent thing; wondered if we should tear down the structures and put something else instead, since climate change would guarantee we’d never have enough water for things as superfluous as decoration and the fountains and waterfalls would never run again. The state government produced incentives for new houses to be built with rainwater tanks to catch the non-existent rainwater, and I caught my Dad filling his with the garden hose so he could continue flushing his half-flush toilet. Dry was chic. We were staring down the barrel of a Tank Girl future and we’d have to adjust. It made the place look stricken and cheap, as though the very idea of using water for decoration belonged to a less enlightened era but we were stuck with the embarrassing evidence.

(It all ended with storms and massive flooding, but that’s another story.) END_OF_DOCUMENT_TOKEN_TO_BE_REPLACED

I’m probably just as crazy as you

For years, I nursed an irrational sense that something would happen to me at age 37. And like all humans, I gravitated first to disaster and predicted the world would end. For me, anyway. Why? Honestly I have no idea. For a few years, beginning around age 34, every time I looked at a clock the time would be something :37. I started noticing 37s in odd places: on signs, ads, programming code, and even got to the point where I’d gasp at yet another 37 popping up in some random place. Why the paranoia? Do humans naturally gravitate to conclusions signaling the End Times when they identify a pattern, even when no such indication is present (nor even, in many cases, a pattern)? Why did I assume a recurrence of the number 37 meant my untimely death? The one person I ever mentioned it to replied: “Maybe it’s the year you’ll become a millionaire.” END_OF_DOCUMENT_TOKEN_TO_BE_REPLACED

southtopia
Create a free website or blog at WordPress.com.